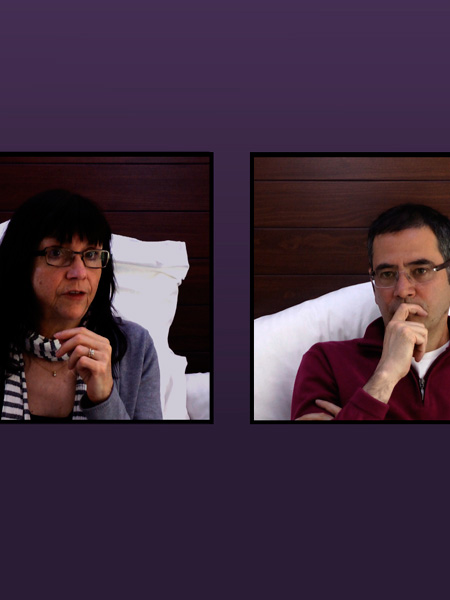 The Long Time is a major exhibition of 21st century art by Toronto artists Lisa Steele and Kim Tomczak. Recipients of the 2005 Governor General’s Awards in Visual and Media Arts, they continue to be celebrated for their significant contributions to contemporary life, art and politics, both in Canada and abroad. Central to the exhibition is the long awaited …before I wake trilogy. This multi-screen installation brings together the three video components, We’re Getting Younger All The Time, Practicing Death, and Entranced. This trilogy took 12 years to make. The final segment Entranced (2012) was commissioned by On Main Gallery and completes what curator Paul Wong refers to as “… (an) epic journey to the other side. This monumental love story searches for the fountain of youth, surrenders to the idea of eternal sleep, and crosses the threshold of the hereafter. It is poignant, chilling, and deeply personal.” Other works in the exhibition include Becoming…, a 3-channel video installation that observes the built environments of Berlin, Vancouver and Toronto; The Miniatures, a series of video objects that offer trenchant phrases drenched in beauty, and the on-going photo/text series …bump in the night, a series of interviews with young people – with the cooperation of the Windsor Youth Centre and the Detroit Hispanic Development Corporation – which is on view in the gallery as well as installed as public art in various locations in and around Windsor and Detroit.

Lisa Steele and Kim Tomczak have worked exclusively in collaboration since 1983, producing videotapes, performances and photo/text works. In 2009, Steele + Tomczak were awarded an Honourary Doctorate by the University of British Columbia (Okanagan); in 2005, a Governor General’s Award for Lifetime Achievement in Visual & Media Arts; in 1994 they received both a Toronto Arts Award and the Bell Canada prize for excellence in Video Art. They are co-founders of Vtape, an award-winning media arts centre established in 1983 in Toronto. Currently Steele is Artistic Director and Tomczak is Restoration and Collections Management Director. Both teach at the University of Toronto in The John H. Daniels Faculty of Architecture, Landscape, and Design.

Paul Wong (curator) is a media-maestro making art for site-specific spaces and screens of all sizes. Wong’s numerous prizes and awards include: the Audain Prize for Lifetime Achievement in the Visual Arts (2016); Best Canadian Film or Video at the Toronto Reel Asian International Film Festival (2008); a Governor General’s Award for Lifetime Achievement in Visual & Media Arts (2005); the Transforming Art Award from the Asian Heritage Foundation (2002); the Trailblazer Expressions Award, created by Heritage Canada, the National Film Board, and CHUM Limited (2003); and the Bell Canada Award in Video Art (1992).