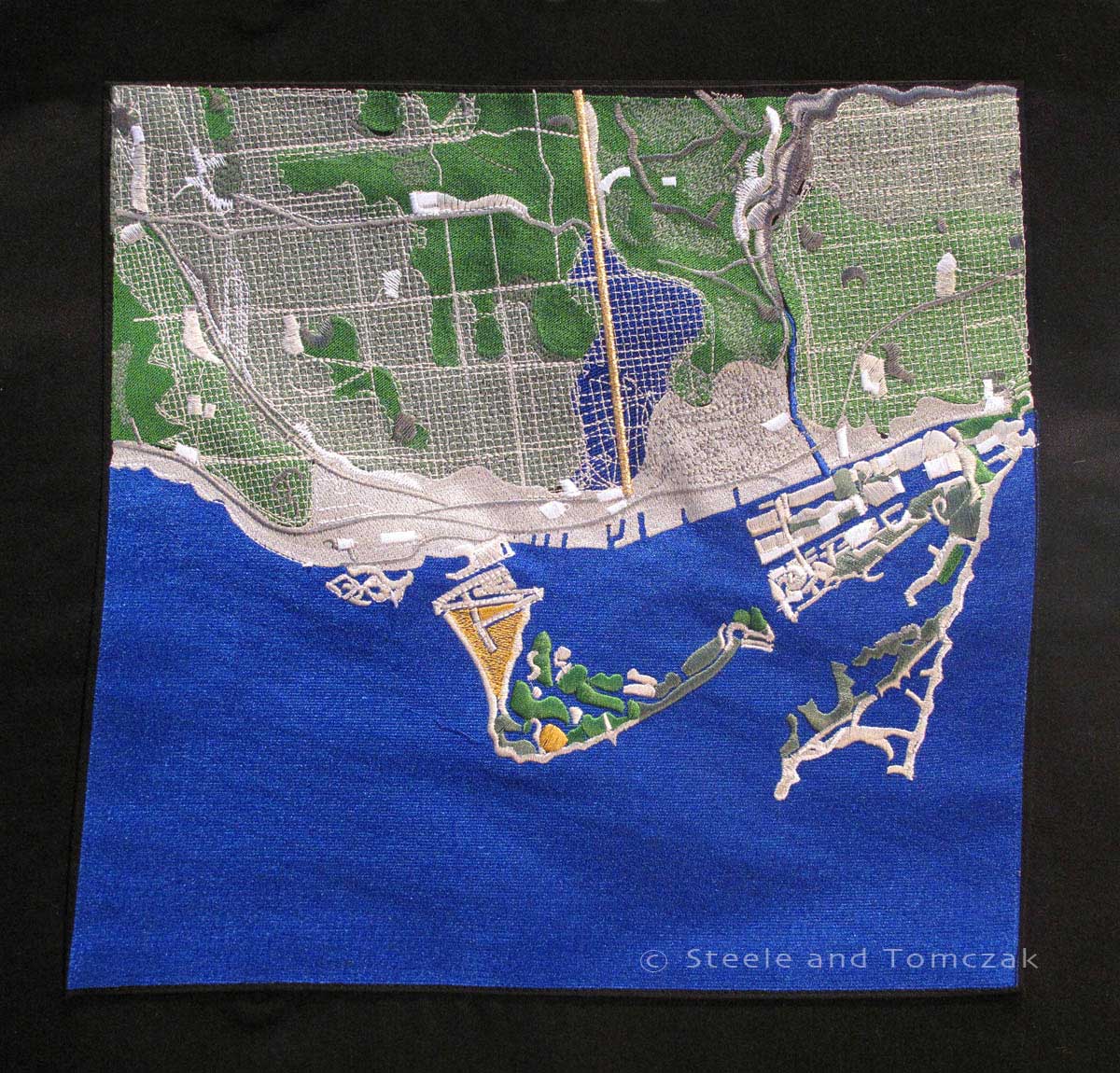 There is a myth about Yonge Street. The myth says that Yonge Street is the longest street in the world, that it is almost 1900 km long. Up until 1999, Yonge Street was even listed in the Guinness Book of World Records.

The reality is still impressive. Stretching from the shores of Lake Ontario through the various “downtowns” and crossroads of the city of Toronto, through York region, Richmond Hill, Aurora, the Oak Ridges Moraine, traversing the Holland Marsh and ending, finally, in Barrie, Ontario. Yonge Street is, in fact, 58 km in length.

We have created an embroidered banner comprised of six 1’ x 1’ panels depicting the impressive topography of this landmark arterial road. The work is based on satellite images of the entire stretch of Yonge Street, showing the dense cityscape of the city proper (depicted through shades of blue/grey) giving way to countryside (depicted in shades of green), with the street itself embroidered in gold thread.

We see this work referencing the traditional Suzhou style of embroidery in the “making of illusionistic scenes…(and) the representation of three-dimensional space” in that it takes the highly technical satellite image and renders it in shimmering colour onto cloth backing. Whereas the traditional Suzhou embroidery would be referencing a hand-drawn image of flowers or landscape, Street of Heaven, makes reference to the built environment of Toronto – not usually one that is associated with great beauty or the sublime. However, seen from high above the earth (literally one could say “from heaven”), the resulting imagery becomes an intricate landscape of infinite detail that emerges as the viewer approaches the work more closely but merges into blocks of gradientcolour from a distance.

Rather than attempting to construct a work of hand embroidery, we have created a work with an industrial process – a commercial embroidery machine, the kind of used to produce insignias on sports teams’ jackets and caps. We see this type of production to be aligned with the image source – a highly sophisticated imaging system located in a satellite encircling the earth. It is also mirrors the contemporary need for “speed”, as both anticipated and supplied by such services as satellite mapping where a user can gain access to distant views at the click of a keystroke.

*WORKshop is an experimental design centre founded in 2010. It is located in the lower concourse level of 80 Bloor Street West, Toronto and can also be reached from within the main entrance to the Bay Street subway station.