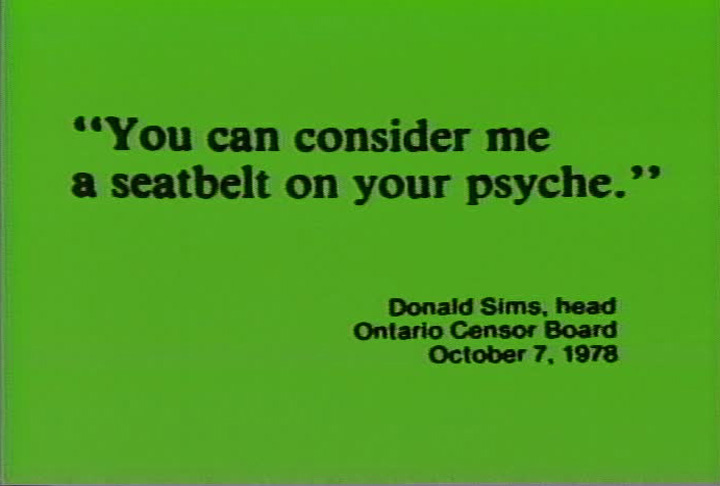 Produced in the summer of 1985 when the censorship of video, film, and visual art was a common occurrence in Ontario, this tape presents a series of interviews to answer the question: How do you say no to the cops and other authority figures? Individuals who have had personal experience with state censorship are interviewed, including Lynne King, lawyer for the anti-censorship movement; Anna Gronau, experimental filmmaker and founder of OFAVACS (Ontario Film and Video Against Censorship Society); Doug Sigurdson, coordinator of A Space when the Ontario Censor Board confiscated artists’ videotapes there; Thelma McCormack, feminist, professor and researcher on the effects of “pornography”; Hans Bergschmidt, a professional film projectionist; Beverly Cavanaugh, owner of a videotape rental store busted by police but never formally charged with any offences; and Susan Ditta, coordinator of Canadian images Film Festival, who was charged with contravening the censorship laws of the province for showing an artist’s film at her festival. While incorporating documentary-style material, this tape makes no attempt to achieve a “balanced” point of view. Instead the interviews are interspersed with blatantly fictional set pieces that underscore the surreal effect that state intervention has on the lives of individuals.