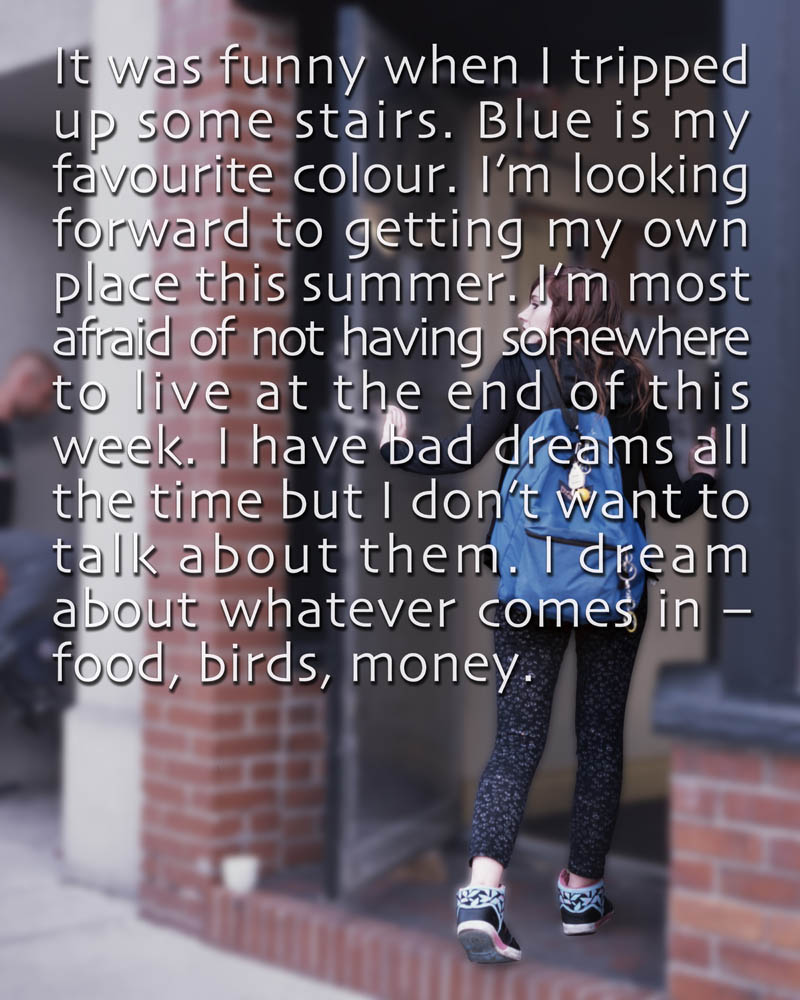 …bump in the night (Windsor/Detroit)

…bump in the night (Windsor/Detroit) is a continuation of a series of photo/text works we have been producing since 2001. In this series, we work with a group of young people who are at a time of transition in their lives. To produce the works, we record a short interview and then photograph the young person at the threshold, most often a doorway. We then use the transcribed interviews to produce an overlay onto their image.

In Windsor, with the support of Executive Director Tamara Kowalska, we worked at the Windsor Youth Centre (WYC), a drop-in centre offering support to homeless or under-housed youth. With Tamara’s encouragement and facilitation, we were able to interview a number of young people who use the services of the WYC.

In Detroit, we worked at the Detroit Hispanic Development Corporation (DHDC) where Lex Zavala, Youth Services Director, and Rosa Guerrero, Youth Services Assistant, ensured that we had interview subjects and participants for …bump in the night. DHDC is a non-profit organization committed to making a difference by creating life changing opportunities for youth and their families.

We ask about fear because we think that it is the thing that is least likely to emerge when young people are interviewed about themselves. Fear is a taboo. As adults, we don’t want to know what young people are afraid of; it’s too close to what we ourselves fear – loss, pain and failure. And for the youth who attend programs at the WYC and DHDC, the additional stress of economic uncertainty adds yet another layer of unpredictability and risk to their day to day lives. We thank all out participants for their time and energy in helping us complete this project in Windsor and Detroit.